So I know I’ve belaboured the point about the difference between volume responsiveness (i.e. will there be significant increase in cardiac output with volume infusion) and volume tolerance (is the volume I am considering giving going to have nefarious consequences), because in my opinion, the focus has been – rightly so to some degree – to look for an accurate way of discerning responsive patients from non. Of course this is absolutely necessary, as one does not want to give volume if it will not have any benefit, but the too-common corollary to that is to automatically give volume to those who are responsive.  Here is an earlier post about this:

So in discussing with a bright young colleague yesterday, Dr. St-Arnaud (@phil_star_sail), I realized that there may be a common conception that physiologically, the relationship between the two may be the following: 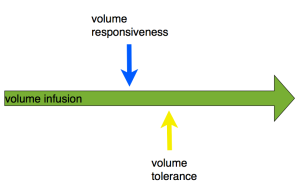 This would mean that it is safe to give volume until a patient is no longer volume responsive, and even perhaps a bit more. Alternately, the two may be closer:

This would mean that once can go just till the point where the patient is no longer volume responsive.

Either one of these scenarios would be awesome. That would mean that by using any of the flow or volume variation techniques, arterial or venous, we could pretty much remain safe.

While the above may hold true for healthy subjects, I would contend that in sick people (which is who I tend to deal with, especially when resuscitating shock), that the more likely physiological relationship is the following:

Hmmm… That would mean that assessing for volume responsiveness would only tell you that there would be an increase in cardiac output, but absolutely nothing about whether it would be safe to do so.

This concept is not a new one by any stretch of the imagination. It’s inferred in the diagnosis of “non-cardiogenic pulmonary oedema.” So what causes this shift? Here:

So, how do we figure out where the point is? Sorry to say there is no answer that I know of. My friend Daniel Lichtenstein uses the FALLS Protocol (identifying the appearance of B lines during resuscitation) which is the least we should do, but I suspect that at that point, we have already overshot the mark. My adopted mentor Dr. Andre Denault (@Ad12andre, in addition to IVC, has identified portal vein characteristics including pulsatility (lots of stuff in press) to show that the viscera are at risk, but as of yet there is no simple answer. CVP value? Please. CVP tracing morphology? Maybe.

No simple answer. No one-size-fits-all velue to look for. Clinical integration.

In my opinion, one should not, in sick patients, seek to volume resuscitate until the point of no-volume-responsiveness. The old adage of “you have to swell to get well” likely kills a few additional patients along the way, just as much as under-resuscitation. I plead guilty for over-resuscitating patients for years before realizing that being on the flat part of Frank-Starling is 100% a pathological state.

Love to hear your ideas and comments!

I like your graphics, it makes the concepts tangible. I think we should try to integrate ‘volume status’ into this framework as well. A physiological purist might say that as soon as you are ‘hypervolemic’, you are volume intolerant, because hypervolemia is an abnormal state which should always be avoided. A functionalist might say that you become volume intolerant as soon as you have physiological embarrassment of any organ system – but how is this determined? My gut is that by the time there are B-lines in the lung, you’ve gone too far. By the time there is abnormality of splanchnic venous return, you’ve already gone too far. I am more of a purist, so in my perfect ICU, I would perform q4-6 hour radio-labeled albumin studies to determine the patient’s true plasma volume. In health, the normal blood volume is about 80 mL/kg [thus, once you’ve given a 70kg man 5 L of NS, you’ve almost certainly replenished his vascular volume]. The moment that the blood volume becomes > 95% the norm, I would call the patient volume intolerant and stop volume expansion and focus on venous tone with pressors, cardiac function with inotropes, etc. To me, this makes the most sense in the pure Guytonian world; if you keep flogging a patient with litre after litre of fluid and the patient’s BP remains low, you are missing something – volume is not the answer – regardless of what an ultrasound shows you:
1. trouble shoot the venous return curve [i.e. too little blood volume, too little venous tone, too high resistance to venous return]
2. trouble shoot the cardiac function [i.e. poor rate, rhythm, contractility, valve function, biventricular afterload]
If you need some objective measure of blood volume before you can call volume status optimized before moving onto the next problem to fix – that’s a radio-labeled albumin.
Maybe I’m crazy.cheers

Thanks for commenting Jon!

I totally agree, if we knew each patient’s normal blood volume, that would be a starting point.  And of course, that would prevent the over resuscitation of a very dilated and compliant venous system (small IVC on ultrasound). Let us know if you figure out a practical way to do that!

It’s too bad that extravascular lung water doesn’t seem to have panned out – not sure why exactly.

Join 9,479 other subscribers
This is your Journey